skip to main | skip to sidebar

While no weekend activities can compete with Lucia's canning extravaganza (61 pounds of tomatoes - utterly insane), I have a few recommendations from the past week.
Posted by 11frogs at 5:52 AM 2 comments:

As mentioned last week, I bought a pressure canner at Farm and Fleet. So this weekend I was going to get down to business and use it!

The problem was I only had about 10 tomatoes from my own 3 tomato plants: 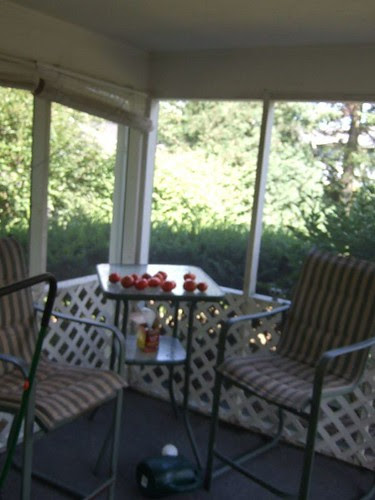 My backup, Rick's garden, was hit hard by the heavy rains and resulting tomato splitting. This meant not much of a harvest there.

I found a pick your own vegetables farm: http://www.thetreefarm.org/

Rick and I went together. It was AMAZING! There is no reason to feel guilty ever again that I don't grow enough of my own vegetables. In fact, there was a lot of guilt about the amount of veggies going bad in the field. 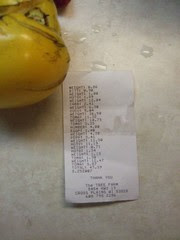 Tomatoes: 61 lbs, Cabbage 12 lbs, Cucumbers 6 lbs, Hot peppers 6lbs, 4 eggplants, 1 Bittermelon (anyone know what this is or what to do with it???) and then something I can't identify on the receipt: HOTY 11.3 lbs.

Besides being a bear to carry up the stairs into the kitchen (why can't I figure out how to make the dogs into pack animals?), ummm, what in the world was I thinking... 61lbs of tomatoes!

Rick and I spent Saturday evening doing the exact same thing over and over and over:
1) wash tomatoes
2) blanch tomatoes in boiling water
3) plunge tomatoes into ice water (note for you want to be canners: you need a lot of ice. If you run out of ice, those frozen ice packs do just fine. If those all get defrosted on you, then feel free to use the multicolored plastic ice that came with your summer cocktail mixing set.)
4) peel tomatoes and core them
5) chop tomatoes
6) cook tomatoes into a sauce

Some pictures from our processing night: 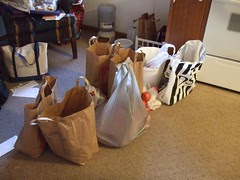 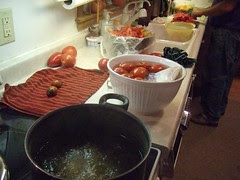 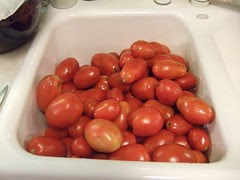 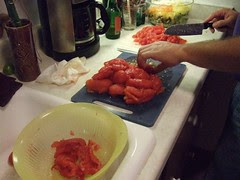 Sunday - ah, the easy part, right? canning.
Here is what I did - (after going to Farm and Fleet to get 2 more cases of jars, 5 gallons of cider vinegar, a Tide sized box of canning salt, mustard seed and dill seed)
1) start sterilizing jars in dishwasher
2) start huge vat of boiling water
3) clean cucumbers for pickles (those buggers get real dirty)
4) set all clean cans out on "canning station" table
4.5) feel good about how beautiful everything is in my kitchen
5) start heating up all the tomato sauces, salsas and stewed tomatoes from yesterday
5.5) remember that I have two cantelope that MUST be "processed" somehow today
6) get a bit overwhelmed at number of things on the counter!
7) cut cantelope, spread on baking sheet and put in freezer
8) cut up all the cucumbers, stuff into jars
8.5) get distressed about number of jars of cucumbers. There are two more jars than planned for! I fear some cucumbers aren't going to make it into the promised land of pickledom. 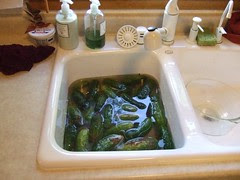 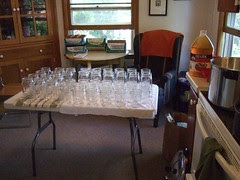 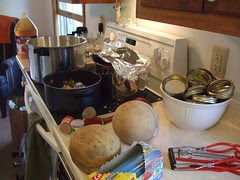 Once the cantelope departed into the freezer, and the sauces were boiling it was time to get started. Soon, the table of clean jars turned into this: 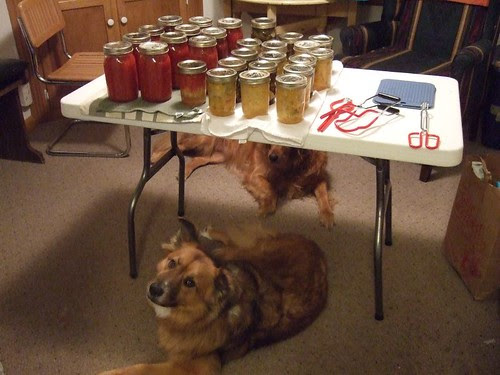 Notice that George and Deuce have morphed into vigilant jar herding dogs. They have rounded these all up into a tight pack. Only one was lost in the night to a poor seal.

At this point in the evening I am very proud of myself. and exhausted.

The most beautiful picture and yet the most depressing still awaits. The remaining bounty: 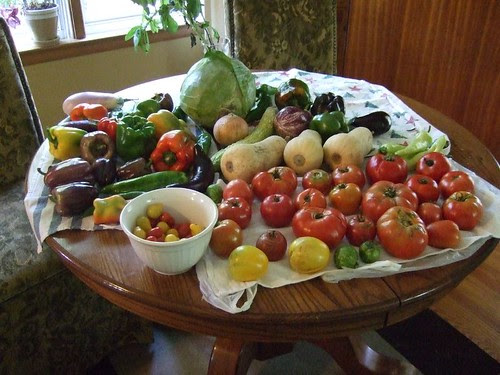 this is all still sitting on my table. I was too tired to do anything with them...oh, and my original tomatoes on the porch are still out there too! eek.

The final haul:
6 P and 1 Q of dill pickles
3 Q of spaghetti sauce
9 P of salsa (4 mild and 5 spicy)-all yellow
8 Q of stewed tomatoes (and 1 pint of lonely leftovers from each pot :)
3 Ziploc bags of frozen cantelope

The casualties: 1 broken glass jar, 1 quart jar of pickles had to be thrown away (lack of dill seed, never doing that again!),

Leftovers: more salt and cider vinegar than I know what to do with, all those vegetables on the table, hot peppers (Rick is going to make a sauce of some sort. I was pretty exasperated as he picked 6 lbs of tiny little hot peppers, I wasn't going to delve too far into what his plans were for them), and then of course the mysterious 11lbs of HOTY.

Final call- Fun, very fun. But could be enhanced by breaking it out over a couple more days, and including wine and some friends to entertain me.
Posted by Lucia at 5:33 PM 4 comments:

I couldn't have written the canning post half as good as 11Frogs. It was a masterpiece.
However, I will tell you that I spent the week telling everyone at my customer site about how I was canning this weekend and would be doing it next weekend too. They were a bit surprised I think. (I am a real ball buster at work...)

I also experienced this bizarre high all week from the knowledge that I stored food for the winter. My insides get all squishy and I get a little wild eyed thinking about what I will do with my pressure canner this weekend. I may or may not be a giant squirrel.

I even woke up in the middle of the night in my hotel room this week worried that because I put oil in my recipe my canning would be ruined (as I read another recipe that strongly warned against it). But, I looked up the recipe and it said oil so I am fine.

Domesticity is cool. If the country's infrastructure is destroyed I feel confident that I can live off the land. (with the help of a close by Farm and Fleet store).
Posted by Lucia at 2:26 PM 2 comments:

Kind of exactly the opposite of roaming

More like very tightly gripping the very essence of home and this moment of summer, grinding it all up, boiling the hell out of it, and sealing it in a jar to enjoy next winter. Or next Tuesday, as the case may be. Ni modo. The moral of the story is: We took up canning, and it's awesome.

Two weeks ago when I went home to meet the babies, I helped my aunt (the one who has a garden measuring in acres and can feed 200+ people with no problem) can salsa and pickles. I also snapped a five gallon bucket of beans - the big ones for garlic-pickled beans (yum!) and the small ones for canning. Lessons:

I came back on a mission, and the Universe supported me. Jars at Goodwill for 15 and 25 cents apiece. A tomato U-pick scheduled at our CSA farm for this week. And the clincher: while waiting for my laundry to dry one morning last week, I gaze across the mounds of stuff in the basement and, alas, in the distance I see a ray of light shining down upon my neighbor's canning kettle ripe for the borrowing. Clearly, this was meant to be.

And so Saturday morning found Wintergypsy and I foraging tomatoes, hot peppers, a buttload of basil, tomatillos, and a stray eggplant and squash or two from our CSA farm and the quickly overgrowing garden from the program I volunteered at this summer. Lucia foraged from her and a friend's backyard and the farmers' market.

This was my starting supply o' produce. Ridiculous. 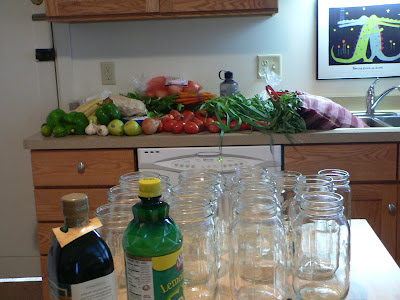 We then gathered at my house to encase the food in jars. In typical Lucia fashion, there was none of this halfway, try-it-out, used, borrowed b.s. for her. Oh, no, she took the Farm & Fleet canning section by storm and bought a canning kettle, pressure canner, and sundry jars, lids and canning tools. The lil' magnet jobby-do for picking the lids out of the boiling water was the cutest.

We sanitized (well, mostly) jars and lids, heated our food back up, and popped several batches in the canner. 15-20 minutes for salsas, 30-35 minutes for spaghetti sauce. With our expected organizational glitches in the timing of the various heatings and fillings and sanitizing, particularly the "sanitize" cycle on my dishwasher, this took us nearly 4 hours.

After the ladies left, I proceeded to make a buttload of pesto. The limiting reagent turned out to be the cheese. 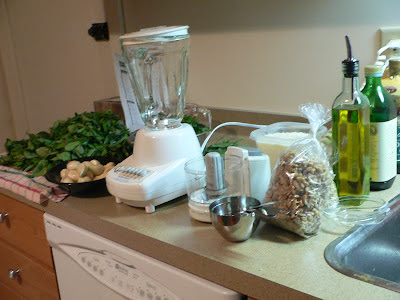 2-1/2 hours later - a full 11 hours after I started cooking - I had a bowl full of green gold. And that was without the several hours of work the ladies saved me earlier by picking all my basil off the plants for me. Yeesh.

It may not look like much, but the final results of all our efforts looked like a masterpiece to me: 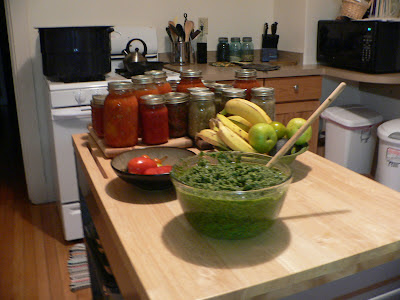 And my reward meal of sweet cherry tomatoes, fresh mozzarella, and pesto, which was so summerly sublime I almost cried. 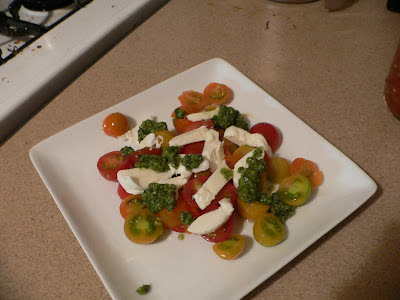 Lucia is making the leap from water bath canning into pressure canning this weekend. The adventure continues ...

It was raining. It was muddy. It was 58 degrees. It was not enough to stop four girls from getting their fill of sweet corn and cheap beer.

Once again, the Sun Prairie Sweet Corn Festival proved worth the drive (especially since it's so much closer for me in my new house). Who doesn't love getting their own corn, having it hand rolled in butter my teenage girls, and salting it from a giant tree of salt shakers?

Since I didn't get any pictures (if I had, I'm not sure anyone would've felt they missed out), so in memory, here are some shots from last year: 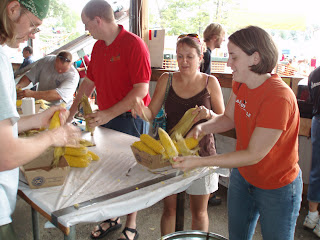 This time, however, we did add a stop to a local Sun Prairie dive on the way out of town. Can't recall the name of the bar, but they had a rockin' jukebox and made great Old Fashions. Mmmmm, Brandy....

a blog for Kitty to check out

I have decided that when I feel like crap I will find something on the internet that makes me laugh.

for instance this morning, when I am so sick I am taking a sick day and missing a flight to my second home, and yet staying awake (albeit moaning audibly) for two work calls. The first one at 730am, the jerks organizing the call never gave any call in info and then didn't bother calling me either. then, my 8am with a customer... it is 30 minutes later and still no call despite emails and VMs. sigh.

So, I found the blog above. It reminds me very strongly of Kitty, in fact, I think that she needs to get on the website redesign, as her current one is not at all "her".

The line that made me laugh:
So, there I was, bored with nothing to do when a guy sits next to me and busts out a portable DVD player. I couldn’t see what movie he put into the player, but I knew one thing: Someone sits next to me with a portable DVD player, then I hope they want some company, cuz I’m watching what they’re watching.
Posted by Lucia at 8:16 AM 1 comment:

More pictures from the Great Wisconsin River Canoe Trip of 2007. 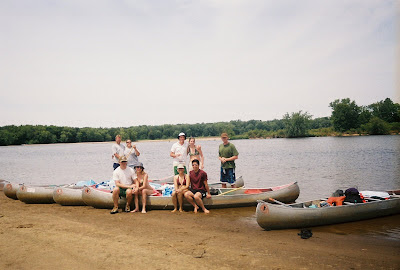 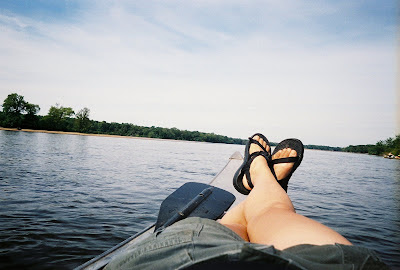 You can't get much more relaxed than this. 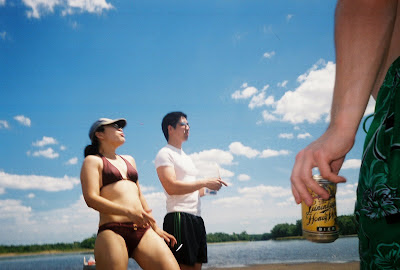 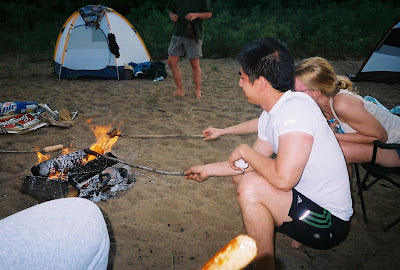 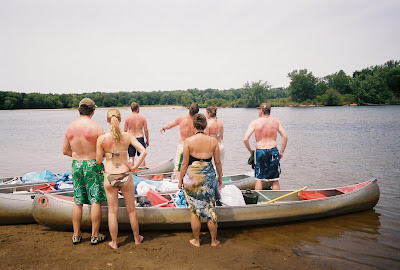 We fought the sun, and the sun won.

There are also several hilarious pictures of the Divine Miss M in various states of undress mid-river, but one mustn't post photos of one's female friends in their skivvies on the Internet, however amusing they may be. 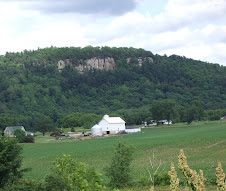